Sophie VERGER was born in Paris in 1953. As a teenager, she attended The Academy of the Grande Chaumière and the Montparnasse 80 evening school.

In 1970, she prepared for admission to the art schools of Paris at the ROEDERER Academy of Art. In 1971, Sophie VERGER entered the Nissim school of CAMONDO, where she discovered sculpture during drawing workshops at the Museum BOURDELLE. She passed the entrance examination at the Beaux-Arts and was admitted there in 1971.

She met Etienne MARTIN who strongly encouraged her to continue on her chosen path and then followed classical training  at the FAVRAT workshop.  Several years later she opened a modelling and drawing workshop and also, organized exhibitions. In 1991, she gave her first exhibition in Paris at the Colette Gallery DUBOIS. Amazed by the exhibition  at the LOUVRE on German sculpture of the 15th century she began to diversify her work by modelling virgins with heads of draped animals which were exhibited in 1995 at Whitstable in Great Britain. Then from 1996 she began her the series of shields.

At this time, she created amongst other works, the stacked time less warriors, inspired by the song of Craonne. These pieces were presented in 1999 at LINEART Contemporary Art Fair in Ghent, Belgium. Then followed the series of eggs, eggs which exploded, releasing wide-eyes characters. A first exhibition in 1999 followed at the Château of Grouchy about which Jeanine RIVAIS wrote an article, and then a second exhibition at the CORDERIE, a former factory located in Etaples, near Le Touquet on the Côte d’Opale.

In 2000, she won the public prize at the exhibition "Sculptures & Jardins" in Lille on the theme of wildlife, a theme that gradually became for her a source of inexhaustible inspiration, reinforced by her meeting with Caroline CORRE and the Animal theme exhibition at the Museum BOURDELLE. She then exhibited her first bronze sculptures. The GOT gallery in Paris displayed her work. She exhibited for the first time in Brussels in 2001 at the Antique and Art Gallery then followed her first museum exhibition at the POMPON Museum in 2003. It was at the gallery Lise CORMERY, in 2003, that her first rhinoceros were exhibited. During MAC editions 2003 and MAC 2005 in Paris she established numerous professional contacts to enable her to broaden her representativeness. Several municipalities acquired her work (Berck, Chantilly, Saint-Brieuc, Saint-Ouen l'Aumône, Sarlat, Vauréal, Villers-Cotterêts, Viroflay). Daniel BOULANGER after meeting her at the gallery Gilbert DUFOIS wrote about her work. In 2008, she exhibited for the first time in Germany, then in the Netherlands, at the Burgerweshuis in Zierikzee. A second exhibition of her work took place in 2010 at the Museum POMPON and two personal exhibitions at the Galerie Gilbert DUFOIS in 2010 and 2014. Four large sculptures were presented in May-June 2014 in the courtyard of the Sorbonne in Paris.

Museum exhibitions and galleries continue to this day. The sculptures of Sophie VERGER appear in private collections in the United States, Switzerland, Germany, Great Britain, Belgium and the Netherlands. 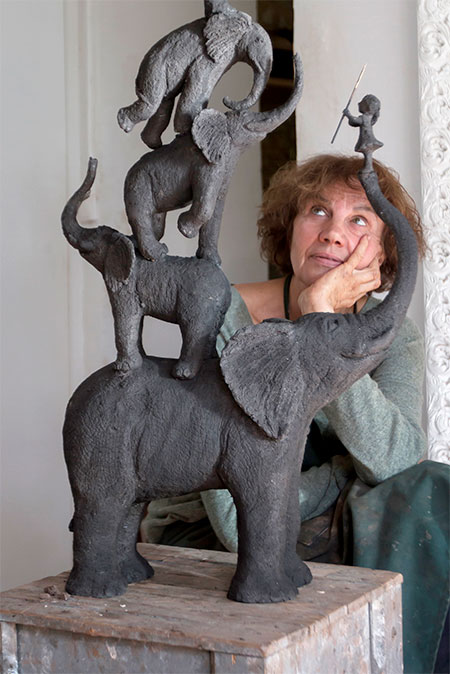