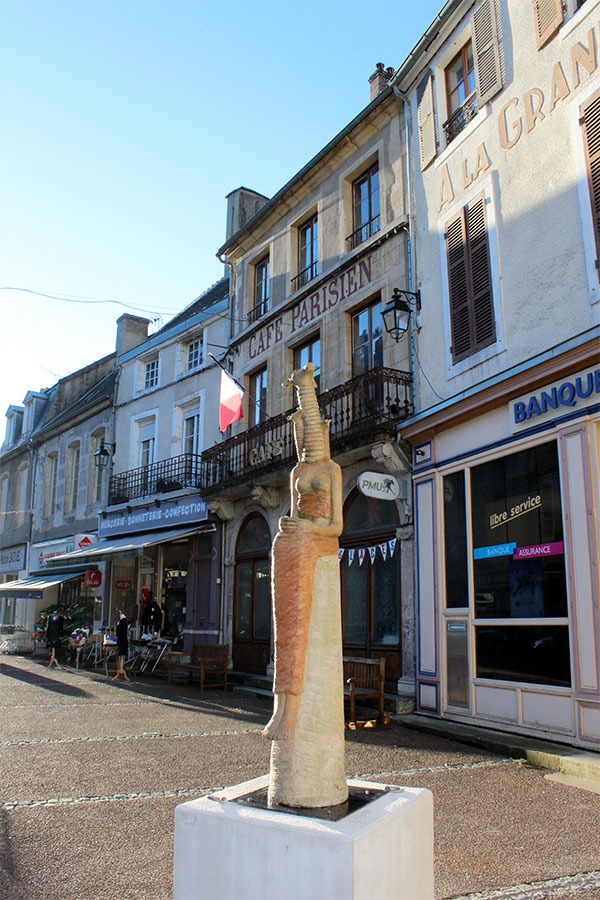 To start, the first contact. A woman with a somewhat hoarse voice on the telephone proposing that I participate in a sales exhibition at Bernard Loiseau’s in Saulieu. Large pieces to to be exhibited in the gardens, small pieces at the Villa in Sens. An event organized to commemorate the hundred years of the creation of Pompon’s polar bear.
It was the month before; time was a bit short. But for me Saulieu is a city with a heart, with its museum that houses one of my bears, its basilica with its red portal and extraordinary capitals, its Parisian café where Roland Topor and Jean Genêt came and its cemetery that could have inspired Bram stoker.

So I said yes, and we put together nine studio pieces.
A 4 hour drive and Jerome, the nice Obelix municipal employee, accompanied by Guillaume, a young rugby playing auctioneer, unloaded 3 heavy pieces. A team of about ten enthusiastic people took care of the rest. Gilles and I were able to go and relax in the town.
Surprise, some inhabitants recognized us, elected officials, the director of the museum, the owner of the Borne Impériale Hotel, the local antique dealer ... After two solo exhibitions at the museum and an "Musée à ciel ouvert" operation in 2016, we felt a little at home.

Sunday, the day of the sale :
About fifty people, three internet platforms, a switchboard and about 150 pieces divided between two-thirds of sculptures of deceased artists, (Pompon, Barry...) and four contemporary artists fromAix en Provence, Dijon, and Oise (us).
A real show by the chic, Oscar Wilde like chief auctioneer. A relaxed atmosphere, albeit it a little theatrical. We sold three pieces at gallery price.

An enriching experience, to be renewed ...