Whilst leafing through a book of photographs donated by my daughter Claire, I came across a Keystone Agency photo taken from behind of a little girl in a swimsuit, with a towel around her neck, going for a swim with a baby hippo.  An unusual idea since, a priori, I have never heard of anyone who dreamt of sharing their swim with this animal known to be aggressive and classified oddly in the cetartiodactyls, between cetacean and ruminant; an entire programme!  But this is about children of different species united in the same pleasure of the promise of bathing.  They go to the river, in agreement, with a decided step.  Obviously I treated the piece in a rounded form, the roundness of the hippo's hindquarters responding to the little girl's curves punctuated by her swimming cap.  They are both in motion linked by a play of glances between them which reinforces their bond. The patina of this bronze is very soft and invites us to imagine the play of water on the skin.

He quickly joined my bestiary as his curves from the view point of form are attractive. The hippopotamus was a symbol of fertility in ancient Egypt and is still very often collected by women. I represent him with his little ones or ridden by rounded riders. I also created, for the game, small anthropomorphic venuses. Attention, in antiquity he followed the fate of the God Seth, sometimes honored and sometimes demonized because he was a destroyer of crops, in a way a symbol of our complicated relations with animals. 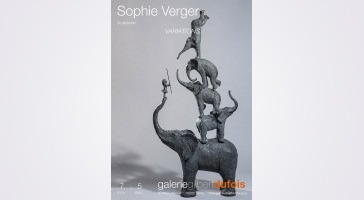